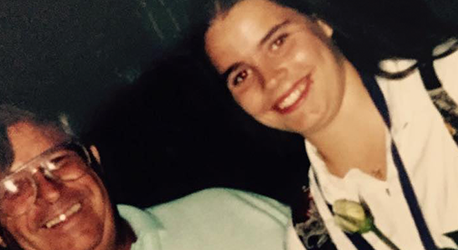 It felt like my own death, somehow, before it happened.

Ever wonder if intuitive experiences and/or Karma even exists…

Read my true story, linking it all together between my father and I…

in a car accident

Beyond 6 months of premonitions, precognizance, claircognizance… it goes by many names.

A psychic knowing, beyond logic… that literally left me having a “feel/know” sense how I am leaving this world.

I was 27, living up north, in Grand Rapids… in August, just about to head into fall.

If you know Michigan at all, you know it’s the rainy season just about then.

I’m talking Thor’s Thunder with sheets of rain, for hours… they have white outs in the winter and washouts in the late summer.

For months I had been experiencing this knowing beyond knowing… this sense of actually feeling like I was going to BE in a car accident AND it felt like death. And that somehow it felt like I had already been in this impending car accident viscerally, I felt it in my skin.

This isn’t real… I’m safe. I look around, check myself, my body, my face, my eyes.

I’m here and now, not dead, not injured, not in any accident, I’m ok, I’m whole.

This knowing invades my dreams, waking and sleeping, every day consuming my thoughts when working or driving or just walking and being… it’s a completely pervasive feeling that I just can’t “shake”, no matter what.

So strange… WHY is this happening? Why is it so intense?

I succumb after a time.

“Is that why I’ve traveled so much, so young, felt free and fast like fury to do the things I’ve wanted to do, no matter what, no holds barred?”

Is that even possible to know how you’re gonna die ahead of time? Why would I want to know that? Maybe it’s better to know than not know? Or is it?

The day goes by, no accident. The next, the same.

“Well, when is this accident going to happen, can I know that at least?”

A month goes by, no accident.

A surrender is felt.

I had to let it go, let it lie down and rest.

It’s too much to know that and yet not know.

How can I live with that?

More months have gone by…

I’ve rather forgotten as much as possible about this looming feeling.

Yet a whisper still presents… when I pay attention.

I’m driving to Chicago to Six Flags… gotta be there by 9a when the doors open! I’m meeting someone, don’t want to be late.

It’s raining out. Still very dark… darkest before the dawn.

Sheets n sheets of rain coming down on Hwy 131 South.

I can’t see the end of my car…

Should I pull over or slow down?

I slow… keep driving though.

My heart is racing, what should I do? Maybe pull over?

I won’t make it in time if I wait this out…it could rain for hours, as it does.

I hop on the next highway… and the next.

Still not out of Grand Rapids proper… this is gonna take a while.

My body is SO tense.

I’m going to be late.

Better late, than never… I guess.

I pull around a bend, merging onto a new highway.

Something is ahead of me, but I can’t make it out…

I’m squinting, rain is hitting my windshield so hard still… the fug!

I’m disoriented as it makes no sense at all.

Why are windows right in front of me, like that?

I’m on the highway, still moving.

Then all of a sudden… I see it!

A car, sideways, perpendicular to mine, with no time to turn!

No time to swerve, no time to escape.

I hard steer all the way to the right!

Stopped hard in this drenching darkness, on a 5 lane highway, downtown Grand Rapids.

Shoot, I better back up, move my car? Will it move?

Someone’s going to hit me just like I hit this car?

I take in the scene…

I’m in the middle lane of traffic

Right shoulder is open, maybe I go there? Can I even get there?

Do I physically get out?

Oh, where’s the man? There was a man!

Why is this confusing?

Look left… there’s a truck in the left shoulder.

I see a man banging fiercely on his steering wheel… he’s so upset!

I check my body… my face, no airbags deployed, I’m wrecked.

Inside and out, but my actual body is ok though. No visible damage there.

I proceed to backup my car

My heart already pounding, I didn’t exit my car

I can’t see what I rolled over

Shit, did I just roll over the guy? There was a guy, I saw him.

I move my car to the right shoulder.

No man in sight.

I look to where I thump thumped, it was a bumper… who’s?

Ok I’m safe, in the right shoulder now… I get out.

I grab my umbrella out of my trunk.

I walk to the left shoulder.

There is a man… on the ground.

The pickup driver still upset in his ranger size pickup. His hood now shaped in a V.

The man has his blues on, with his embroidered name on his patch.

Looks like he was a mechanic heading into work?

I speak his name… to him, while holding the umbrella over him.

Cut above his eyebrow.

One of his arms bent in a place that it shouldn’t be bent.

Shockingly console him, help is on the way.

Grunts are his only response.

No scratch on me.

No scratch on the pickup driver.

even a trial that lasted almost a decade…

And did not survive after 2 weeks in the hospital.

That sudden flash of a man I saw, was him running across the road… and while I steered right, there was a truck behind me that steered left.

The man ran left and encountered the front end of the truck, with his body, directly.

This was a constant, huge, traumatic deal in my life for a while.

In a conversation unrelated to this experience per se,

I finally confessed to my father my truest passion and desire and launch of Intuitive Human.

He kept having this repeating dream of his car being rolled

Off the side of a cliff in California, where he was stationed at the time

And this dream repeated itself night after night, it wouldn’t let up.

Sure enough, one night, he had too much to drink and was driving home…

When he found himself living out his dream.

His pickup was rolling over a cliffside, just like in his dreams

And he was inside.

He crash landed at the base against a tree…

And somehow, walked away,

For both my father and I to share similar premonition, precognizance, claircognizant

Being shown ahead of time

and both of us post-accident

never had that dream again

How many coincidences does it take to be called something more?

Definitely got me multi-dimensionally curious

About questions I don’t even know the words to

But can feel exist at some level

How is any of this possible?

We are rich in our experiences, beyond our knowing and belief

Be open to one another and seek

And then Listen Deeper.

Photo: 1994 High School Graduation night w my Dad, about 10yrs before this experience occurred for me.